Stockwell Gate has seen some of the most extensive alterations over several decades, particularly since the building of the Four Seasons in the 70s. But before this, it was riddled with narrow streets and passages, which branched off into residential areas of somewhat infamous repute with poor inhabitants and criminal dealings. Not a place to visit at night! 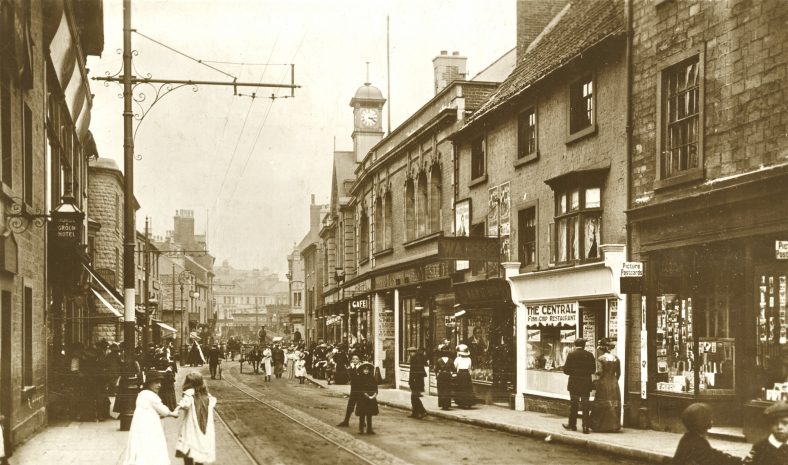 One such street was Padleyhill Road on which stood a row of run-down cottages known as the ‘Botany’. A poor family named Salmon lived on the Botany. The mother was a struggling widow named Mary Ellen Salmon.

Ten year-old Ernest Salmon went out playing with his friends one day and was sitting on a wall opposite a passage. At the end of the passage stood a group of three youths and some girls they were trying to impress. One of the youths, named Harry Wright, had a gun. Suddenly, there was a deafening blast as the gun fired, and Ernest cried out before collapsing to the ground. A bullet had been shot through his vital organs and he was bleeding profusely. Ernest was carried to his home and a doctor was rushed to his aid, but it was already too late. Ernest had died.

Inspector Chandler undertook the investigation and witnesses provided descriptions of the three youths who had been seen handling a revolver in the passage. Chandler was soon lead to the house of Harry Wright on Union Street. After some denial and persistent questioning, Wright eventually admitted that he had been out with his friends and that he had a gun. His bedroom was searched and the revolver was found in a hole in the wall along with several cartridges, including one in his coat pocket. Harry was charged with the killing of Ernest salmon and taken to Mansfield Police Station.

Harry claimed that he was not the one who had fired the weapon, stating that one of the other youths had done so, intending to fire at a street lamp but that it had discharged by accident. Wright identified one of his companions as Samuel Neale, and a day later, another came forward admitting to being one of the party, Arthur Stevenson.

As the owner of the weapon, Harry Wright was regarded as the chief suspect and appeared before the Mayor at the Mansfield Police Court to the charge of murder. Inspector Chandler described Harry’s reluctance in questioning, his evasiveness, the fact that the murder weapon was found at his home, that Harry had ‘made good his escape’ after Ernest fell, and that several witnesses made a positive identification. Harry’s own request for bail was refused and the inquest was opened at the Town Hall that afternoon. 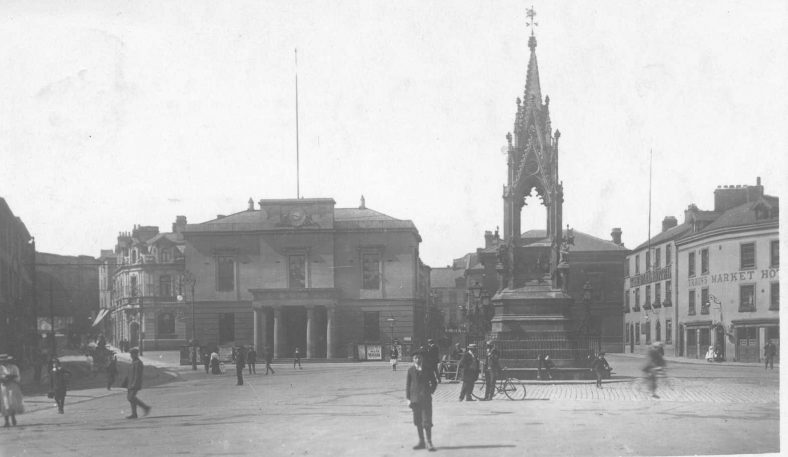 Mansfield Market Place with the Town Hall in 1910

That same day after the tragic event, Mary was being interviewed by the Mansfield Advertiser, but all she was able to say in her grief was, ‘All I know is that Ernest went out to play, and they brought him in dead.’ Ernest’s funeral was held at the Mansfield Cemetary a few days later, at which numerous people attended, including some of Ernest’s friends.

The next week, Harry Wright returned for a second hearing. Superintendant Rodgers on behalf of the police asked to withdraw the charge of murder and impose a charge of manslaughter as the circumstances would better meet the case. His request was granted and the magistrate’s hearing resumed several days later.

Samuel Neale testified that he had first met Wright on Bancroft Lane. He then left to visit some stables near the Botany where he heard the first shot and saw Harry holding a gun. Samuel told Harry to put the gun in his pocket and they walked on to the Botany. They met some girls in the passage and started a conversation. Harry convinced one girl, Annie Boot, to try firing the gun into the air, but it failed. Arthur Stevenson then arrived and warned the girl that the revolver was not a toy and the girl handed the gun to him. Neale then claimed that he had turned to talk to another girl when he heard the gun go off. He then saw Ernest stagger and fall. He and Arthur carried him to his home, but Harry was nowhere to be seen. When questioned whether he had seen Wright handling a cartridge, Samuel stated that he had seen Harry holding a cartridge in his mouth with the gun cocked open while talking to the girls.

Arthur Stevenson had also heard a gunshot prior to meeting with Wright, Neale, and the girls in the passage. He testified to warning Annie that the gun was not a toy and after asking Wright whether the weapon was loaded, was told that it was not. Stevenson then examined the gun and even pulled the trigger into his own face! The court Clerk asked why he had done this and he stated that he had taken Harry’s word for it that it was not loaded. The Clerk was astounded at the man’s stupidity. After handing the gun back to Harry, Arthur stated that he had also seen Harry handling a cartridge in his mouth while opening the gun. The fatal shot was heard just a few seconds later.

Annie’s statement closely corroborated with Neale’s and Stevenson’s only that she did not see Stevenson handling the weapon. Unfortunately, she also did not see who fired the fatal shot.

In an earlier statement written by Wright he claims that he did, in fact, tell Stevenson that the gun was loaded and even opened the gun to show him the live cartridge, but that Arthur had ignored his warning and fired the gun at a street lamp twice: the first with no success, the second being the shot that killed the boy. He then stated that Annie had told him he had better leave quickly, which he did.

Ernest’s friends were the last witnesses to appear. Sidney Hurst and Edith Simons both testified that they had seen three youths playing with a revolver and Wright leaving the scene after Ernest fell off the wall, staggered onto the road, and collapsed.

Harry Wright was finally tried for manslaughter at the Nottinghamshire Assizes where, after protesting his innocence and explaining his lack of experience with handling firearms, the jury concluded that he was not guilty but should be censured for his carelessness. Harry Wright was then allowed to leave the court with no further charges.

This sad story of the loss of a young life is similar to some of the news we hear today. A child goes out to play with their friends and never comes home. Although it seems likely that the gunshot was fired accidentally, it goes to show how dangerous showing off can be. How do you feel about Harry Wright? Should he have been more severely punished?