John Shippam, known affectionately as ‘Old Jack’ by the locals, was a market-stall holder in Mansfield Market Place.  He was a native of Mansfield and lived on Belvedere Street with his son-in-law, William Theobald.

John Shippam liked a drink and when he wasn’t selling fish and fruit on the market he was often found in the nearby public houses around the Market Place. John’s love of drink often meant that he would incur numerous debts, which strained his relationship with his sons, George and Joseph, who shared his business on the market.

Thursday was Market Day in Mansfield. John Shippam was trading from his stall when his son, Joseph, arrived to collect an outstanding debt that his father owed him. John had already had a few drinks throughout the day by this point, so Joseph thought it prudent to collect the money. He later asked William Theobald to collect the debt leaving John with about 10s (50p) in change. Enough for a few more drinks! 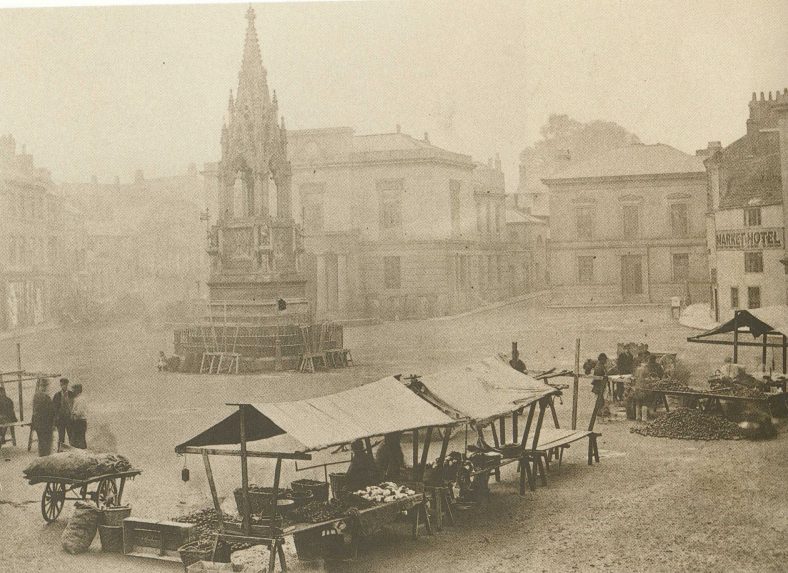 Mansfield Market Place in the 1800s

As the day weaned on, a friend of John’s, William Baxter, took over the stall while John went with two other men to the Black Boy pub, which stood near the entrance to Stockwell Gate. John was merrily spending the remainder of his money on more drinks for him and his companions. Little did he know that he was being watched by a wholly unsavory character named James Baggalley. James was also a native of Mansfield who had a bad reputation. Seeing John ordering drinks he himself ordered an ale and asked John to pay for it. John, still having his wits about him, refused. After the other men eventually left, John went out the back door towards the urinal at Angel Yard. James Baggalley followed him.

A short while later, a waiter at the Black Boy was called over by a group of children, who pointed and laughed at John at the urinal. By now he was quite intoxicated. The proprietor of the Black Boy ordered the waiter to stand guard and prevent John from reentering the pub. While he stood guard by the door, he saw James Baggalley leave the urinal to go back into the pub. As the urinal was a single stall the waiter realized that James must have been in the urinal with John. A fact which disturbed the waiter greatly.

John staggard out of the urinal and into the stable which stood further up the yard. Baggalley promptly followed him. The waiter, who still felt uneasy about what he had seen, told the proprietor of the Angel Inn, Joseph Coleman. They quickly went to the stable and saw James Baggalley standing over the passed-out and disheveled form of John Shippam. Knowing James’ reputation, Coleman guessed that Shippam must have had money on him that Baggalley wanted. He ordered James out of the stable and then locked John inside, safely.

Coleman quickly went to the stall to inform Joseph and George about their father, but, used to their father’s drinking habits, they said that it was better that he sleep in off in the stable. Coleman enquired whether their father had any money on him. They answered that there couldn’t be much as they had collected most of his takings earlier in the day. Joseph Shippam then suggested that they go to the Dial Inn for a pint, knowing that his father was safely asleep in the Angel Yard stable. But how ‘safe’ was he? 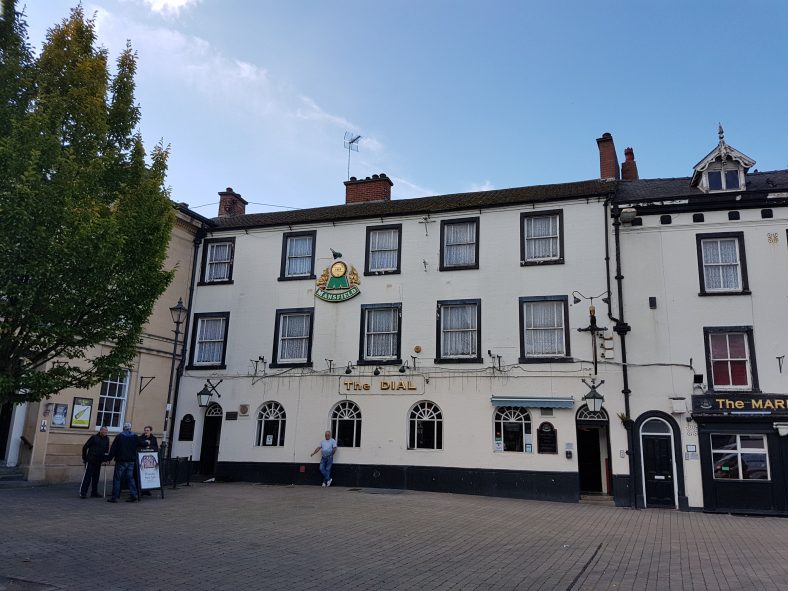 James Baggalley later returned to the Angel Yard where he encountered Baxter, who had been holding the stall for John. Baxter asked, “Where is Old Jack?” to which Baggalley replied that he had better check in the yard to see whether John was “dead or no.” By now the Shippam brothers and Joseph Coleman had arrived and already had the key to retrieve their father.

Baxter, George, and the waiter unlocked the stable door and found John still lying unconscious. They noticed that his clothes were disordered and dirty and that his pockets had been turned out. George searched his father and found only a few ha’pennies were left. But worse was that he was bleeding heavily from a wound at the back of his head.

Meanwhile, Baggalley had gone to the bar and was buying drinks for himself and a friend with several copper pennies he had since acquired. George saw Baggalley and angrily shouted to his brother who had stayed in the pub, “that man nearly killed our father!” Not wanting any trouble, the proprietors told James to leave. Joseph hurried to the stable to find his father close to death. He quickly sent for a doctor but within minutes, John ‘Old Jack’ Shippam died.

The doctor noted that John’s head wound as a result of striking his head against a nearby wall with some force, stating that several pints of blood had been lost over several minutes. But what caused him to hit his head so violently was still unanswered. The police were informed and James Baggalley was arrested and taken into custody at Mansfield Police Station.

The inquest was held at the Wheatsheaf pub on Stockwell Gate and a huge crowd of people massed in front of the building. Evidence was heard from the Shippam Brothers, William Theobald, William Baxter, Joseph Coleman, the waiter, and several other witnesses who testified to the constant appearance of Baggalley at the scene as well as to John Shippam’s habits and expenditure.

When it came to James Baggalley’s appearance, he was evasive and contradictory to the statements of several witnesses. He often avoided straight answers and when warned by the Coroner, Mr D W Heath, that he had better “be careful” of his answers, he took no heed and remained furtive, denying that he had been with Shippam in the stables despite being seen by witnesses. 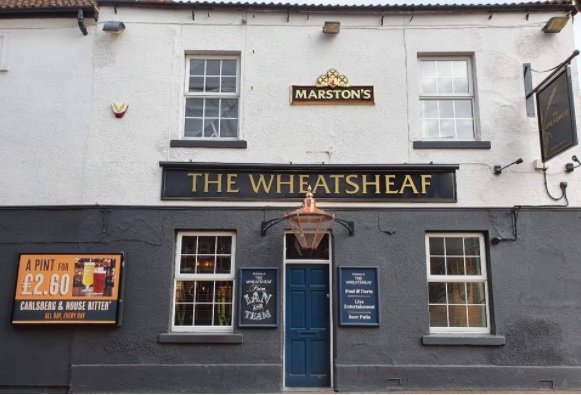 The Wheatsheaf pub on Stockwell Gate in 2020. Site of James Baggalley’s inquest

Heath was convinced of Baggalley’s guilt, given the statements of the witnesses and the sequence of events, plus Baggalley’s reputation. He reminded the jury of Baggalley’s evasiveness and contradictory answers. He pointed out that Baggalley was the only one to be seen with John at the stable, which had been locked, and that Baggalley was also seen begging for a drink but refused and later seen leaving the urinal after John.

After an adjournment of several days, the inquest resumed at the Wheatsheaf. The fact that James had robbed John Shippam seemed irrefutable, but the question of whether he caused the injury of his death did not have enough evidence to convict Baggalley of murder. The Coroner advised on an open verdict and the jury agreed. Despite his bad reputation and the suspicious circumstances, Baggalley escaped a murder charge.

Later, Baggalley was taken to a magistrate’s court on the charge of robbery of the dead man. After being presented with the same evidence, the magistrate decided that there was also insufficient evidence against Baggalley even for the robbery charge. James was discharged and walked free from the court having escaped both prison and a death sentence.

John Shippam was buried at Mansfield Cemetery during James Baggalley’s inquest, and a crowd of several thousand people gathered outside the gates during the funeral of that well-known character, ‘Old Jack’.

The death of ‘Old Jack’ remains a mystery. What do you think? Was John Shippam murdered for his money? Was James Baggalley guilty? The next time you visit Mansfield Cemetery, see if you can find John Shippam’s grave and pay your respects to the well-known market-stall holder, just as thousands of people did over 100 years ago.