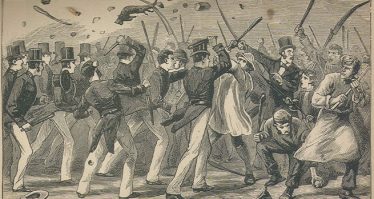 Between the 12th and 14th August 1839, riots took place in Mansfield’s Market Place in support of the Chartism movement which was popular around this time. The rioters took over the Market Place for some time and managed to stone the Yeomanry out of the market when they attempted to uphold order. A troop of cavalry were called and when the crowd refused to disperse, the cavalry drew their swords and charged, giving blows with the flats of their swords. The rioters fled, with some attempting to escape the cavalry by running up Leeming Street, but they were caught and arrested.

Chartism was a political movement from 1836 to 1848 whose main aim was to gain political rights and influences for working class men*. It got its name from a petition known as the People’s Charter (1839) which set out the demands the working men wanted. Many working people were unhappy at this time due to high rates of unemployment and a decrease in wages in the textile industry, a large employer in Nottinghamshire and Mansfield, but they had very little political influence (around 813,000 out of 24 million people were eligible to vote in the UK), and many laws favoured the rich and suppressed the interests of the poor.

Literacy rates were improving which allowed for information to be transferred around quickly through posters and pamphlets, and some of the most influential figures within Chartism were from Nottinghamshire, including Jeremiah Brandreth who was from Sutton-in-Ashfield. Alarmed by the revolution taking place in France, the Whig government attempted to prevent social unrest among the poor by introducing tougher sanctions for sedition (behaviour likely to incite people to violently rebel against the government). This included the Combinations Act (1799-1800) which prevented meetings between workers and made trade unions illegal. People who were arrested in Mansfield’s Market Place in August 1839 would probably have been charged under this Act and would have been punished with either three months imprisonment or two months hard labour.