The tragic and horrific case of Samuel Slater and his wife and victim, Elizabeth Slater

Samuel Slater was deaf and suffered from a speech impediment. He often found solace in a drink but also became extremely violent and usually took out his frustrations on others. One such victim was his wife, Elizabeth.

The Slaters lived with their three children on Gedling Street off Nottingham Road but had originally come from Derbyshire to find work in one of the Mansfield sand quarries. During the last ten years of their marriage, Samuel became increasingly more aggressive and would attack his wife. He once woke her up by placing a burning match onto her eyelid while she slept. He tried to strangle her and threatened her life many times. Samuel also threatened and terrified his children who often fled with their mother to a neighbour’s house, Henry Samson, for refuge.

Finally, after another violent attack on the family, almost destroying the house, Elizabeth was granted a separation by the Mansfield magistrates. Although she did not hold Samuel responsible for his actions, she stated that he was ‘not fit to live with’.

Elizabeth moved in with Henry and Samuel was ordered to pay a maintenance fee for his children while he moved in with his brother and sister-in-law on Moor Street. Still, Samuel refused to leave Elizabeth alone and wrote a letter to the Bench requesting that the separation order not be made, blaming his aggression on the ‘ale’. He also refused to pay maintenance fees and was jailed for a month.

He bombarded her with letters, some of which professed love while others threatened violence. He would also turn up at Henry Sansom’s house on Gedling Street demanding to speak to his wife. According to Sansom, these visits would always end in aggressive behaviour from Samuel.

One evening in August, Elizabeth left her lodgings and went out, telling Henry that she was going to visit her sister. Not long afterward, Samuel also left his lodgings, telling his sister-in-law that he was going out to meet his wife and to leave the door open for him. Although the details of this meeting are not known, it was assumed that Samuel Slater was meeting his wife to plea and threaten her to come back to him, and Elizabeth, clearly still having some feelings towards him, had agreed to see him.

Later that night, three men were standing and talking by the Field Mill boot factory, Messrs. Royce, Gascoine & Company, near St. Mark’s church. Not far away, on Portland Street, they saw and heard a man and a woman talking though they couldn’t hear what they were saying. A few minutes later, the woman – later identified to be Elizabeth Slater – came running towards one of the men, Harry Bingley. He caught her in his arms as she collapsed and was shocked to discover that she was covered in blood. Moving her to the light of a street lamp he found that her throat had been cut and she was bleeding profusely. 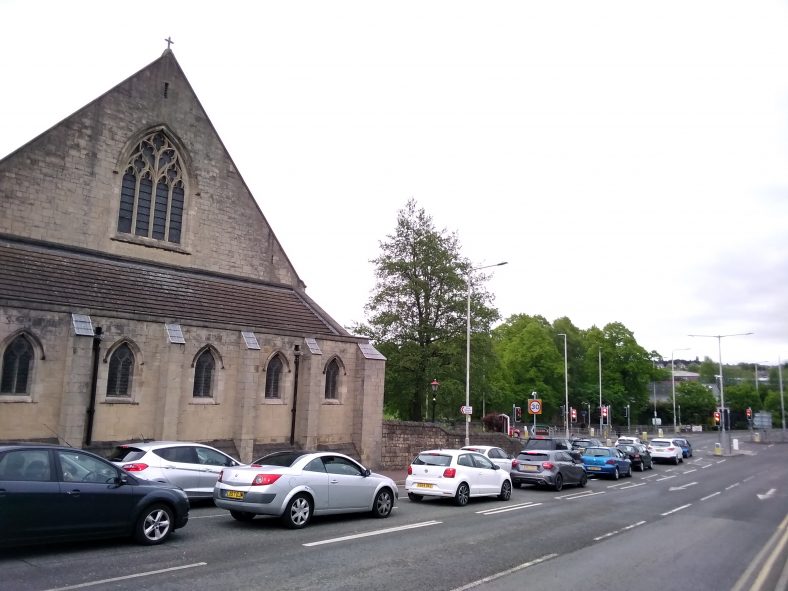 The place where the attack happened. St. A view of Mark’s Church and Nottingham Road from Portland Street, near Field Mill

Bingley shouted to his friends to stay with Elizabeth while he went to look for her attacker. He found Samuel Slater, who was also bleeding from a wound in his neck. Returning to the woman he urged one of his friends to fetch the doctor and the other to fetch a policeman. As Harry Bingley tried to help the woman towards the doctor’s house on Nottingham Road, Samuel attacked him from behind. The surprise of the attack caused Harry to lose his grip on the dying woman and she fell to the ground. Samuel fell on top of her and then cut her throat a second time with a razor. He then slashed his own throat twice.

Samuel slumped to the ground, not yet dead, and Harry quickly grabbed the razor. The doctor arrived and managed to stop the bleeding for Samuel, but Elizabeth was already dead after her windpipe and ‘great vessels’ in her neck had been slashed. Constable Richards also arrived and took the razor as evidence while Samuel was hauled into an ambulance. Samuel died on his way to the hospital.

The inquest was held at the Town Hall on the Market Place the following day, supervised by District Coroner Mr. D Whittingham. The first witness was Slater’s sister-in-law who stated that Samuel had been well-behaved during his stay with them and that he loved and often spoke about his wife.

The Coroner produced a letter written by Slater to his wife at the Mansfield Library (now the Old Libary) on Leeming Street, asking her to meet him at the end of Baums Lane and also saying that she could bring the children so that he could see them. Mr. Whittingham said, ‘It was a good job she didn’t take the children.’ 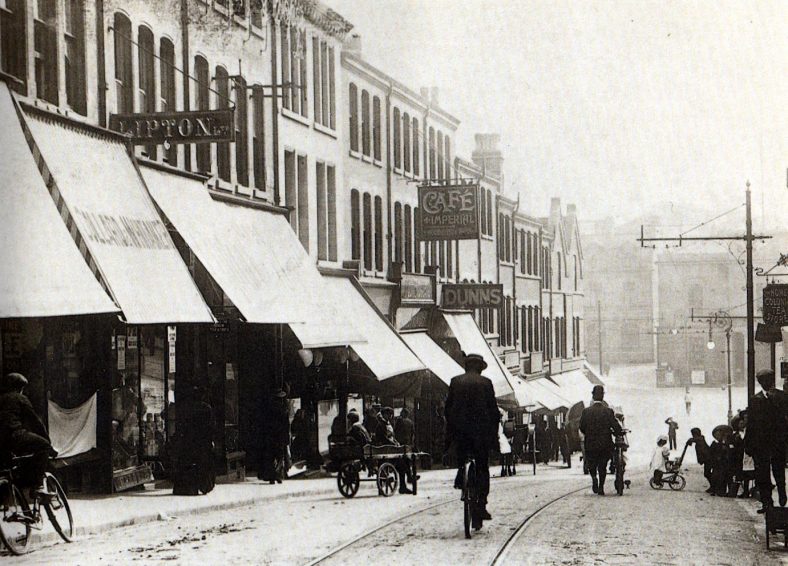 Leeming Street in the 1900s, at the top of which stands the Old Library

Harry Bingley described the traumatic incident of that night, giving full details of the murder and suicide. Bingley told the jury how he had tried to help the woman but was then attacked by her husband, unexpectedly. He did not see the razor until it had been dropped by the killer. The Coroner agreed that it must have been a ‘trying ordeal’ and that Bingley was lucky to have escaped any injury.

Other witnesses testified to seeing the couple on Portland Street including the doctor. Henry Samson also stated that Elizabeth Slater had been lodging with him for safety from her husband, giving evidence of Samuel’s verbal abuse and threats.

At the end of the inquest, Mr. Whittingham was shocked by what had occurred and admitted that he had never had a case like it before. He felt that it was ‘not like Mansfield and not like Mansfield people’ to behave in such a way, and that the ‘less said about it, the better.’ He reminded the jury of Samuel’s threatening letters to his wife and his actions of violence towards her, stressing that ‘whatever the state of the man’s mind’, there was no excuse for what he had done. There was no doubt that Samuel Slater had deliberately cut his wife’s throat, then took his own life ‘wickedly and feloniously’. The jury agreed with the judge and the verdict was that of wilful murder and felo-de-se (suicide).

In earlier times, anyone who died of felo-de-se would be buried at a crossroads at midnight with a stake through their heart. It wasn’t until after 1882 that the deceased was given a Christian burial in a cemetery.

The Coroner expressed a wish that the Mansfield Advertiser would produce a restrained report on this horrific event, giving hardly any details that might sensationalize the incident. The question at the time was whether newspaper reports of murders actually led to an increase in crime via their tragic or romantic aspect.
The Advertiser’s rival, the Mansfield Chronicle, however, published a fully detailed account of the deaths on Nottingham Road. In later years the Chronicle and Advertiser would merge to become the Mansfield Chad.

Samuel Slater was a violent bully who abused and controlled his wife. Despite this, she had still agreed to meet him on that fateful night. Neither ever returned home. It seems clear that he suffered from mental health problems, possibly fueled by his frustration of being deaf and with a speech impediment. Perhaps his move from his home in Derbyshire to Mansfield had not been a happy one. He took out his anger on those he claimed to love. Subjecting his wife and children to terror and trauma.

It’s interesting to note that Coroner Whittingham said that ‘the less said […], the better…whatever the man’s mind’, showing just how unaware people were of mental health disorders. This case raises a lot of issues that resonate today. Mental health disorders are finally being discussed and domestic abuse is being addressed.
Also, there is still a discussion whether the media and even video games incite violence, just as it was thought, then, that news articles about murder might lead to a rise in crime. However, nothing could excuse the actions of Samuel Slater against his wife and the pain he caused his children.